We get a lot of inquiries about various circumstances surrounding dissatisfaction on the job, especially when it intersects with your boss or management. Ever wonder what the most common opening statement is from an employee expressing dissatisfaction in the workplace is? Out of 272 Quit Your Job clients surveyed, here are the top seven complaints of dissatisfied employees about their bosses. 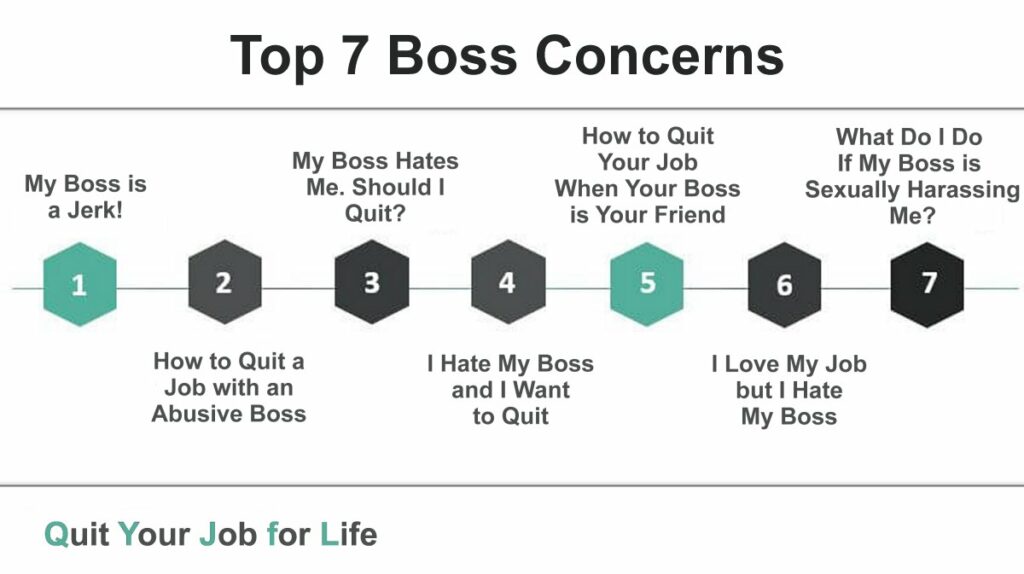 You might have seen that one coming. There is definitely a lack of respect for supervisors, managers, and higher levels of administrative staff among dissatisfied employees, and “My boss is a Jerk!” is the most opening statement uttered by unhappy line staff.

2. How to Quit a Job with an Abusive Boss

The employee ranks are so concerned about being bossed around and consider it a for of abuse that they are looking for a way out. Then there are the employees that believe that their boss is out to get them. So furiously, in fact, that they are likely to state their concern as follows:

You can see that there is definitely a flaw in modern management. In most cases the angst in the employee pool could be quelled by increasing communication, connection, and respect between administration and line staff. Similar to number three is I Hate My Boss and Want to Quit at number 4.

Unlike feeling as though your supervisor doesn’t like or appreciate you (or even worse) hates you, in this respect, the employee feels as though there is no connection with the supervisor, and everything they say or do causes an extreme emotional revulsion in the employee.

5. How to Quit Your Job When Your Boss is Your Friend

When you’ve been hired by someone who is a friend, this can lead to difficulties. It can strain your friendship, and cause friction amidst other coworkers who believe you are getting special treatment, and lead to a more than undesirable set of circumstances. Nepotism is a two-edged sword that can easily sever an otherwise solid friendship. And when the friend (or former friend) employee wants to leave it can be awkward and confusing.

Another example of management’s concerns when employees are violently opposed to their supervisors, except, in this case, the employee is a faithful servant to the company or organization. And due to the disgust felt by the growing disgruntled but otherwise effective employee, the loss of the hire may be coming soon.

7. What Do I Do If My Boss is Sexually Harassing Me?

Thankfully, sexual harassment in the workplace is on the decline. The risks endured to any company or organization that allows such behavior is far too great to condone such activity, but there is still some lingering activity in the arena. According to victims of sexual harassment, the harassment tends to follow them from job to job. In that case, looking to being one’s own boss is the best answer to stop the cycle of abuse.

That said, it is imperative that management take notice that their employees cannot be controlled in the same manner as they were during the industrial revolution. The times are changing, and management must change with them, or else you will lose valuable employees who do not have to take it anymore and they could be far better off working for themselves, being their own boss, and working from home.